What is an leaf spring

A leaf spring is a simple form of spring commonly used for the suspension in wheeled vehicles. Originally called a laminated or carriage spring, and sometimes referred to as a semi-elliptical spring or cart spring, it is one of the oldest forms of springing, appearing on carriages in England after 1750 and from there migrating to France and Germany. [1] 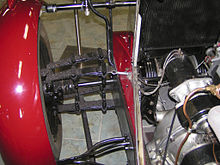 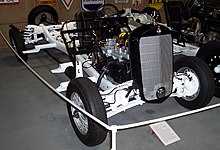 A leaf spring takes the form of a slender arc-shaped length of spring steel of rectangular cross-section. In the most common configuration, the center of the arc provides location for the axle, while loops formed at either end provide for attaching to the vehicle chassis. For very heavy vehicles, a leaf spring can be made from several leaves stacked on top of each other in several layers, often with progressively shorter leaves. Leaf springs can serve locating and to some extent damping as well as springing functions. While the interleaf friction provides a damping action, it is not well controlled and results in stiction in the motion of the suspension. For this reason, some manufacturers have used mono-leaf springs.

A leaf spring can either be attached directly to the frame at both ends or attached directly at one end, usually the front, with the other end attached through a shackle, a short swinging arm. The shackle takes up the tendency of the leaf spring to elongate when compressed and thus makes for softer springiness. Some springs terminated in a concave end, called a spoon end (seldom used now), to carry a swiveling member.

The leaf spring has seen a modern development in cars. The new Volvo XC90 (from 2016 year model and forward) has a transverse leaf spring in high tech composite materials, a solution that is similar to the latest Chevrolet Corvette. This means a straight leaf spring, that is tightly secured to the chassis, and the ends of the spring bolted to the wheel suspension, to allow the spring to work independently on each wheel. This means the suspension is smaller, flatter and lighter than a traditional setup.

Quick link :About Us |Products |Case |News |Service |Contact us